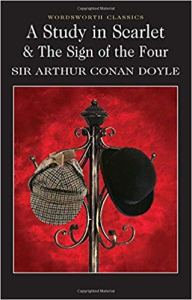 Thoughts on… A Study in Scarlet
The first ever Sherlock Holmes story. I really quite liked this murder mystery.  I enjoyed Dr Watson’s point of view in the first half and the way he looked at unfolding events and of course at Sherlock Holmes and his brilliant, but at times naive, mind. .

This was my first experience of Arthur Conan Doyle’s writing and I have to say I really liked it.

The second half of A Study in Scarlet surprised me, but I enjoyed it nonetheless. It was interesting to get the murderer’s point of view and suddenly there was this grey area.

Thoughts on… The Sign of the Four
I think I actually preferred this tale slightly. I preferred the mystery, despite the 1800s casual racism that featured in it. The characters were interesting, the slight romance was subtle and matter-a-fact and I enjoyed the fact that there was a chase!

Conclusion:
I enjoyed this first experience of Sherlock Holmes. I guess they were pretty much as expected and it is clear to see why their popularity has endured. The stories were easily digestible and clever, but also pretty fun. Despite the fact they were written in the 1880s, for the most part they felt surprisingly timeless (casual racism aside). I am pretty likely to read some more in the future.

One thought on “Book Thoughts: A Study in Scarlet & The Sign of the Four (Sir Arthur Conan Doyle)”