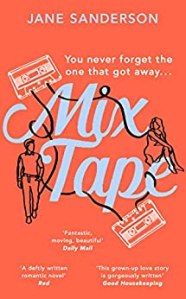 Daniel was the first boy to make Alison a mix tape. But that was years ago and Ali hasn’t thought about him in a very long time. Even if she had, she might not have called him ‘the one that got away’; after all, she’d been the one to run. Then Dan’s name pops up on her phone, with a link to a song from their shared past. For two blissful minutes, Alison is no longer an adult in Adelaide with temperamental daughters; she is sixteen in Sheffield, dancing in her skin-tight jeans. She cannot help but respond in kind. And so begins a new mix tape.

Let me start by stating that this is one of my favourite books I have read this year. I adored it.

Although it is billed as a romance book and the cover suggests a light read, I feel that this is slightly misleading. This books deals with a lot of trauma, such as alcoholism, rape and suicide. If you go in expecting a fun light read, this is not that, and in my opinion all the better for it.

The novel follows two people during two time lines – one in 1979 and the other in 2012/13. In the later timeline both are in their late forties, have other partners and adult children and yet they find their way back to each other, reconnecting through music that they send to each other via Twitter. I loved having older protagonists that still felt young at heart. I guess I recognised much of myself in them!

It does deal with adultery, which is not a subject I am particularly fond of, but somehow it works here and it did not bother me too much.

I loved the main characters, as well as the quirky cast of side characters. There were some really endearing dynamics.

I loved the big role the music aspect played in this narrative. Music is very evocative for me personally, so for me this novel made a lot of sense and I felt wave after wave of nostalgia whilst reading it.

I adored this so much. This was perfect for me.