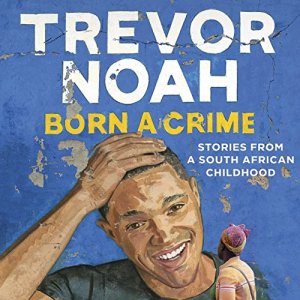 Trevor Noah’s unlikely path from apartheid South Africa to the desk of The Daily Show began with a criminal act: his birth. Trevor was born to a white Swiss father and a black Xhosa mother at a time when such a union was punishable by five years in prison. Living proof of his parents’ indiscretion, Trevor was kept mostly indoors for the earliest years of his life, bound by the extreme and often absurd measures his mother took to hide him from a government that could, at any moment, steal him away. Finally liberated by the end of South Africa’s tyrannical white rule, Trevor and his mother set forth on a grand adventure, living openly and freely and embracing the opportunities won by a centuries-long struggle.

This was a book that had been on my audio-book wishlist for a while and I am glad I finally listened to it. I really enjoyed hearing Trevor Noah talking about growing up in South Africa. He manages to talk about the hardships of growing up a child of a white father and a black mother during Apartheid and the subsequent economic turbulence without ever sounding like he feels sorry for himself.

Hearing about the situation in South Africa from a unique perspective was incredibly interesting.I knew some of the stories already from his stand-up comedy, but I still enjoyed hearing them again.  The tone of his narrative is playful, even if he does talk about very serious subjects and events.  He is matter-a-fact, but explains the situations he found himself in very well and does not sugarcoat too much.

I would highly recommend this one if you like Trevor Noah or if you enjoy a good autobiography that focuses on growing up and place rather than on celebrity.

See here the physical books I read in March. It was a mixed bag for sure! Full wrap-up (including audio and e-books) on my blog. Spoiler: my favourite book was the one on top! . #readingwrapup #march2020reads #bookworm #bookstack #bookstagram #bookpile
#currentlyreading - 'Esmond in India' by Ruth Prawer Jhabvala. A quarter through and I am really enjoying this one. First published in 1958, it reads away pretty nicely and out is a comedy of manners of sorts. I can see the comparison to Jane Austen for sure. . #bookblogger #bookworm #readinginquarantine #reading #bookstagram #instabook #bookssetinindia #readingaroundtheworld
#currentlyreading - My first read for my Mood March is 'The History of Bees' by Maja Lunde. I am using a list of 40 quite broad prompts to help me choose my next read. My random number generator gave me no 27, which is 'read a black book'. I started this one ages ago and only got to page 30 and couldn't get into it. I am 50 pages in now and actually I am really enjoying it! What is your first read this March? . #books #bookworm #bookstagram #beautifulbooks #readersofinstagram #thehistoryofbees #majalunde #moodmarch