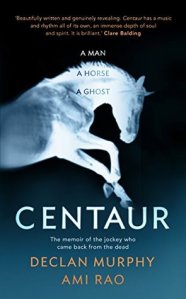 A natural on a horse since he was able to walk, and imbued with a pure love of riding, Declan Murphy became one of the most brilliant jockeys of his generation before his world came crashing down at the final hurdle of a race at Haydock Park.

This book broke and healed my heart. This is the incredibly powerful story of Declan Murphy, the jockey who fell at a fence, had a horse run over him shattering his skull in 12 places and lived to tell the tale. This tale.

The books is written by Ami Rao from Declan’s point of view and it feels incredibly authentic. Clearly a lot of thought and time has gone into the way this biography is told. Considering Declan Murphy has no memory of the 4 ½ years prior to the accident they did a wonderful job in piecing these together from interviews, videos, etc.

What shines through in this books is Declan’s absolute belief in himself througout life and the confidence that anything is possible as long as you believe it is. He does not come across as a humble man, but as a man who has been humbled by the sheer fact that he is still alive.

This book is on par with Seabiscuit in my opinion as one of the great stories in horseracing. A superb book, not just for people who love horses and racing, but for anyone who loves a story of surviving the odds. A fantastic read.