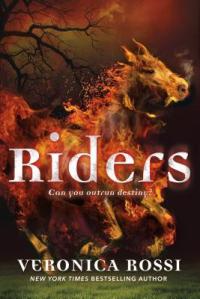 While recovering from the accident that most definitely killed him, Gideon finds himself with strange new powers and a bizarre cuff he can’t remove. His death has brought to life his real destiny. He has become War, one of the legendary four horsemen of the apocalypse.

Sometimes cover buys do not quite work out. This is one of those. That burning horse on the cover pulled, but unfortunately the story inside this beautiful cover left me cold.

It is not a bad book by any means, but it simply was not for me. This is the kind of story that simply does not work for me. Both the characters and plot felt underdeveloped. Things kept happening and it did not make sense in my head. I simply did not care enough about the characters or what was going on, which meant I zoned out in places, which is never a good thing.

There is nothing I actually actively dislike about this book. I like the idea of our main character telling his story to his captors and the reader finding out what happened to bring him there that way. The writing overall is not bad at all. but I just never connected with this story. It simply did nothing for me. It felt too superficial, if that makes sense. It was too straightforward for my taste. It also took me way longer to read than it should.

However, I should say that I never considered not finishing it. If you like the synopsis and you like this type of YA, you may enjoy this, but it was not for me. 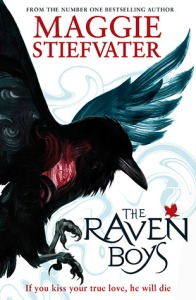 This is the year that Blue will be drawn into the strange and sinister world of the Raven Boys. And the year Blue will discover that magic does exist.

So I have finally decided to start this series and I have to say, it did not disappoint. I was not sure what to expect, but going in I was aware how much people love this series. Now I have read this first book, I can understand why.

Stiefvater seems to build her characters with ease without losing an air of mystery around each of them. The story flows very well. It never feels too slow or rushed. The world she builds is very interesting, and although it has magical elements, this book does not stray into pure fantasy territory.

Instead we get a story full of interesting plot points and well-developed characters with interesting interactions. The plot leaves a lot of room for further exploration of each of the characters and their world, which I like. It just feels a bit different from your usual YA fare.

I enjoyed this very much and I will definitely be continuing this series some time in 2019.

I was so disappointed with this book. The premise sounded pretty good… I mean… A girl that can see/feel life energies and has a mysterious past? Yes please! Erm… no….

From the start I felt the writing was at times rushed or messy and confusing. There were a few times I almost gave up, but once I passed the halfway mark I figured I may as well finish it. Now, the main character, Ana, is the one redeeming feature. She is actually quite likeable. But I felt her character drowned in the world around her. The other characters felt flat and perfunctory to me. Ana falls in love with a guy far too forceful for my liking, so the romance was a big no-no for me. There was a standard urban fantasy trope concerning the romance that bothers me as well, but I will not expand on that, as it would be a spoiler of sorts.

At times I felt it was about to pick up, only to let me down. I did not enjoy the writing and I did not really get into the flow of the story being told.

There are plenty of positive reviews on this book, so obviously a lot of people do like it, but it really was not for me. Maybe I missed something?

This was a sweet summer read and I enjoyed it. I liked the fact that it was about Indian culture in the US. It was great reading about characters that were a bit different than your usual fare in YA contemporary romance.

I am just not sure it was more than that. The romance was sweet, but predictable. The same goes for the characters. Sure I liked them, but I just did not fall in love with them. I think this book is just that bit too young for me and that I probably would have connected with it a whole lot more ten years ago.

Having said that, I did enjoy it and I would recommend it to any youngsters out there that like a bit of cute romance with cute characters. And that is just it, it was just that bit too cutesy for me, but I can see why other people love it!

This YA fantasy took me on quite some ride! It took me a couple of chapters, but once I was hooked, I was hooked!

In the beginning I was worried that this would be like any other ‘chosen one’ YA book, and maybe in some ways it was, but it was so full adventure and colour that I sped through the pages. I loved Eva’s character, who was both scared and brave. Her emotions and actions were believable. The love interest was not overdone and did not rule the story, which is something I appreciate. I loved the gryphons and I am hoping we will find out more about these creatures in subsequent books. I loved the climax and for a change I had not guessed who the baddy was, which is always a bonus!

Overall, I was really impressed with the writing. There were a few bits where I was like ‘hold on, what?’ and I had to retrace a moment because it felt a bit rushed, but overall I think this was a really good read and I would thoroughly recommend it to anyone who enjoys YA fantasy.

Title: Looking For Dei
Author: David A Willson
Genre: YA / Fantasy
First published: to be published on 23 March by the Independent Book Publishers Association (IBPA)
Edition: e-Arc, courtesy of NetGalley and the publisher

There are things I liked about this book and bits that were just ok for me.

The novel focuses on Nara and her friend Mykel as they flee their village after everything goes rather pear shaped at a village ceremony designed to find young people who are skilled or blessed with some sort of magic. The rune-based magic system was quite different from the usual fair and I liked that. I thought the emphasis on a God and religion was interesting and the world building was good, though I felt it was never fleshed out enough for my taste. I could not really understand the lay of the land, so to speak.

The characters is where I felt the story fell a bit flat, especially in the first half. Somehow they failed to come alive in my imagination until the last few chapters, when I finally connected to them.

Overall, I think this is a good fantasy novel with some original features. It definitely feels like it is building up to something more and I think it may be worth reading further books in the series.

I sped through this novel, written from the point of view of a sixteen-year-old girl growing up in a community called The Beck. Her world is constantly threatened by floods and she has never known anything else but the Lower Beck, the area she works in. Until she gets reassigned.

This is a very well written gripping story. I got into it very quickly and was with Quin every part of the way as she learned more about The Beck. The author’s writing style is perfect for this tale; clear and to the point. Yet, this book gave me so many feels. I felt sad, angry, frustrated and heartbroken by the end, but man, was it worth it.

If you have enjoyed dystopian YA novels like The Hunger Games and Divergent, you are sure to love this one. It is well written, has an excellent plot and engaging characters. I kept thinking it would make a great movie as well.

The author provided me with an e-copy of this book, but this does not in any way influence my review. As it is, I thoroughly recommend checking this book out. It is awesome and I am looking forward to reading the sequel Break.

My rather random collection of #newbooks ! #bookhaul #bookstagram
I have been reading this for ages it seems. I have not been much in the mood for reading this week and that's fine. I am enjoying it though! I have about 100 pages left to go... . #currentlyreading #thissavagesong #monstersofverity #veschwab #bookstagram #yabooks
#currentlyreading in the sunshine: On The Come Up by Angie Thomas. . #bookworm #bookstagram #books
Lola Et La Vie
Create a free website or blog at WordPress.com.