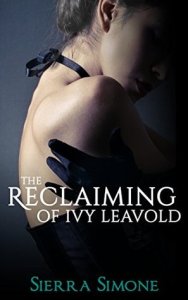 I read the previous two books in this series,The Awakening of Ivy Leavold and The Education of Ivy Leavold, a while ago and rated them 5/7 stars and 3/7 stars respectively. I feel like this one falls somewhere in between the two.

I like the characterisation and the the overall plot is pretty well written. The murder that caused so much unease between our main couple is resolved and the marriage finally happens. But really, the main focus of the book is the smut and the smut is indeed very smutty! It’s a thin line, but sometimes this was just little too smutty for my tastes, but the interaction between our two main characters inbetween the plentiful kinky sex kind of makes up for that.

I would like to read something with more of a contemporary setting from Sierra Simone at some point. I may prefer that as the time period and the events were sort of at odds with each other for me. There is also one more book in this series that I have on my Kindle. I will read that at some point, but I have no desire to do so it right now.

Of course this is all about the smut and that’s fine, but it really left me pretty cold in this one. There was some interesting observations on changes in perspective as you become a mother (or a father), but overall I have nothing much to say about this one, which is really nothing more than an epilogue to the other three books in the series.

Do you read smutty books?